So our app has made it into production and one thing that has come up, which we did not notice before is that when a user taps into an input the display "zooms" in.

Has anybody else experienced this and is there a LANSA based solution?
Top

Since this is an input, I think it is inheriting the Control Theme DrawStyle of "Edit" which is set to 130%.
Which if I am understanding correctly is 130% of the "base" font size of 12px which produces a font-size of 15.6 that renders as 15px.

I don't know if its possible, but I would suggest that a "hard coded" font size should just use that size and bypass the Control ThemeDrawStyle.
Top

Unfortunately setting the font-size does not appear to be stopping the "zoom". I set it to 16 and 17px and the zoom still occurs.

If it comes down to it I may have to try it.
Top

Hi Stewart,
Unfortunately the device is not mine, but my supervisor's. I will try to get a screen shot however. It is an iPhone 7s though. Apparently his and a few other high level VPs and executives are zooming in and not zooming out. He showed me the initial behavior and mentioned it was still zooming after the font size updates. As I write this, I recall that I have not tried recompiling the page after the update. Will try that tomorrow morning. Perhaps its a caching issue again.

If you make your desktop browser as thin as possible, that should give me enough of a clue.
Stewart Marshall

Finally got this worked out it seems. I think it was in fact another caching issue.

Has Lansa made any corrections since these posts in 2017 besides having to use a larger font size? Our mobile apps all zoom in and then the users must use a "pinch gesture" to have the mobile screen reset to the correct size. The larger font is not preferred, curious if anything else can be done.
Top

What setting do you use here in your web page: 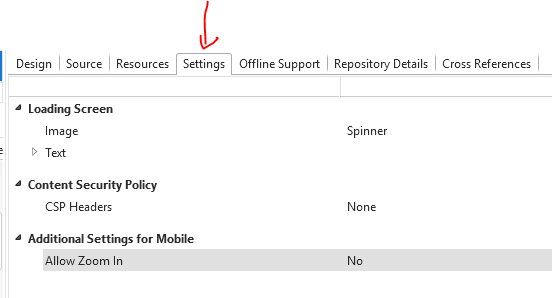